Tears They Run Like Water- A Rock Climbing Story About the Day My Best Friend Died, Part 3 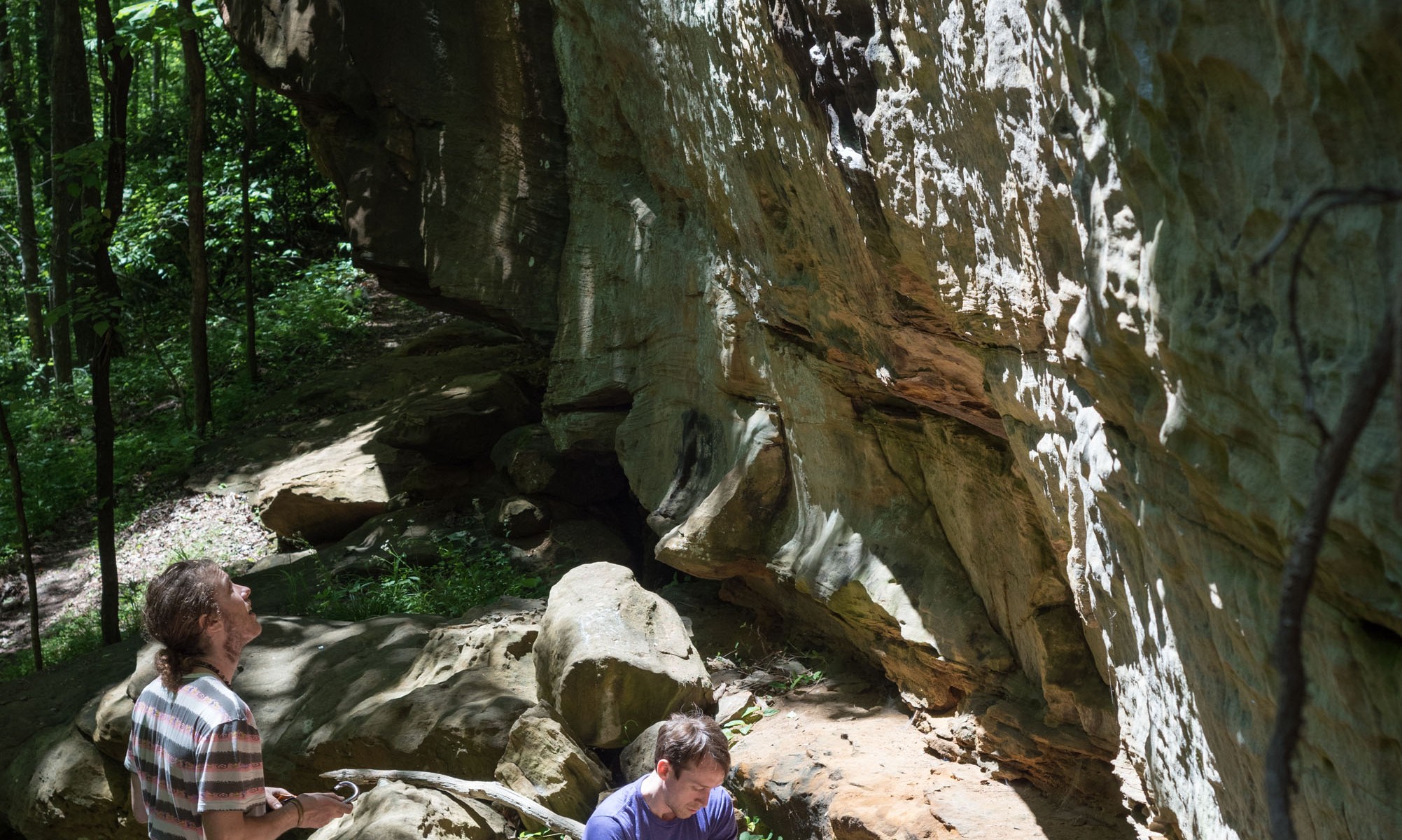 There was still some climbing left to be done for the weekend. The long distance we traveled necessitated that we take as much advantage of the pristine Red River Gorge rock as we could. In addition to that, at this point in our trip, there had been a shift in me. I didn’t want to go home anymore. The panicky urge to drive back to Illinois and then fly to California had dissipated. Now I wanted to hide myself in the hills and in the trees, scaling rock cliffs and sleeping on the ground for as long as I could. Going home meant not having the distraction of the wilderness. Going home meant facing the terrible reality that Eric really was gone.

We decided for a short day. Just a few simpler climbs and we would go home. Before leaving the campsite we broke down camp and prepared the car for our journey home. That way when we were done climbing all we had to do was get in and drive off. As always, packing did not go as smoothly as it did in order to start the trip. We had lost our desire to pack strategically and with intention. A sloppy game of packing Tetris was played as we shoved all the gear haphazardly into the car. We set off for climbing with our disorganized and mobile gear closet banging and rattling behind us.

When we arrived at the wall we were greeted by another busy climbing scene. We ended up having to wait in order to get onto the climb we wanted to warm up on. Unfortunately it was not worth the wait. The very short climb, with its tricky face holds and mediocre movement, was over before you knew it. Clipping chains and lowering off was anything but satisfactory. Nonetheless we were warmed up.

We fingered through the guide book to look for the next climb we would attempt. We found it, not far from where we were, a route called Old English. We set off in the direction of the climb. The trail was tricky, it contained multiple steep parts with slippery loose dirt.  The mud we were trampling through just a few days had all dried up. After passing multiple groups and maneuvering around a large corner in the cliff side we were on our own. The noise from the other groups seemed not to reach us as if a force field had been put up separating us from them.

We were in our own world. The trail we approached on continued down and to the right. It ended in the belly of a large cave much like the other geological formations scattered throughout the Gorge. In the bottom of the cave was a stream that snaked its way down the low parts of the valley back the way we had come. It was fed from a small yet still flowing waterfall that gurgled over the lip of the tremendous cave. I imagined standing beneath the waterfall except with a heavier flow, perhaps during a rain storm, feeling the weight of the water pound upon my shoulders and back, the water hiding the tears that still escaped every so often despite me having a smile on.

Up and to the left stood the climb we had come to climb. It started off as a series of ledges with loose and dirty rock. The main feature of the climb was a large, overhanging and left leaning flake that led to the anchors. It looked intimidating from the bottom of the climb. I remember feeling like I wasn’t ready to climb it. I was secretly excited when Mike volunteered to try the climb first.

Mike and I prepared the rope and quickdraws as Hannah wondered off with the camera. With the rope flaked and harnesses and knots double checked Mike set off. The route began with burly and powerful moves, moderately high off the ground. The landing zone was not ideal so I did my best to spot Mike from an ugly ground fall. He made quick work  of the low crux moves and clipped his first quickdraw. From there he sailed through the climb to the chains. I lowered Mike off the climb with the sun at his back and a big smile on his face. “I enjoyed it,” he said. “Surely I would too,” I thought hesitantly.

A bit reluctantly I tied in and tried the first few moves the climb. They felt hard and spread out even for a climber of my stature. I down climbed multiple times before actually committing to the crux sequence. On my first real attempt I fell to the ground, landing on a rock that shot searing pain through the base of my foot and up through my leg. I limped off and sat on a rock in order to massage the pain out of my foot.

Frustration was already welling up within me. Before giving it another go, I asked Mike if he would clip the first quickdraw for me so to protect me from another ground fall. He floated up the first part of the climb, having memorized the sequence from his earlier attempt, and clipped my side of the rope into the carabiner. Now protected from another bad fall my mind was more at ease, but something still didn’t feel right. I passed the low crux section and began my way up the easy ledges in the middle section  of the climb.

The big flake was now looming over me more so than before. I was intimidated and still a bit shaken from the fall I took earlier. There was an obvious crack in the back of the flake with good holds and places for feet. I tried to tell myself I was strong enough to complete the climb. Luckily, the top section of the route was really good climbing. A combination of layback hands and heel hooks allowed me to reach the top of the climb. I clipped the chains and sat back in my harness to relax. I was completely pumped and tired. For some reason I was feeling increasingly uneasy about being so high off the ground. All I had to do now was clean the route so I could be on the ground with my friends. I wanted to be down so badly.

I made myself safe on the bolted anchors. I told Mike “off belay.” I would rappel down like always, “like every other route”, I thought to myself. My lethargic hands struggled with taking out my figure-8 knot. They moved as if they were frozen despite being in the warm sun. I was becoming frustrated with my inability to smoothly complete a process I had accomplished so many times before. Finally the knot gave and came undone. I fed the rope through the rings and set up my rappel.

One end of the rope, the end I just fed through the rings, lowered off the route in a direct line to the ground. The other end of the rope, the end leading back to Mike with all the quickdraws, followed sharply out right and traced the way I had climbed. Realizing this I began to regret my decision to rappel and clean. I should have followed on top-tope and cleaned as I went.

Cleaning the first two quickdraws was not much of a struggle, but I was getting tired. Each time I had to pull myself to the route, try and secure myself with my feet and maneuver the quickdraw out of the bolt. All the while, gravity was pulling me down and off the route. My left hand, not backed up with a friction hitch, was being split apart by the two ends of the rope going in opposite directions. If that hand failed, which it felt like might, I would plummet to the ground.  I was getting scared and even more exhausted.

As I went lower, the quickdraws I had to take off the wall got further. Reaching them became harder and harder. I was so tired my arms barely functioned. The sheer physical exertion I needed to provide in order to accomplish a relatively simple tasked overwhelmed me. Before I knew it I was crying, and then screaming. All the emotional trauma of the past few days was boiling up inside and spilling out of me. I was scared. Scared of falling and hitting the ground. Scared that I would never see Eric again. Scared for the next person who I love to die.

I was completely in shambles. Hands dangling and hunched forward on the rope, I cried. My tears raised small amounts of dust as they hit the ground 60 feet below, like the rain drops upon the roof of my car two days prior. The only thing keeping me safe was Mike and Hannah. They pulled on each side of the rappel line in order to lock my rappel device in place. Without them I would have fatally fallen to the earth, but at least I would be done and down.

I am not sure how long I sat there sobbing uncontrollably, halfway wanting Mike and Hannah to let go, but, eventually I was on the ground. As my feet reached the ground Mike and Hannah enveloped me in a loving embrace. In the middle of these two people, with their hearts pounding powerfully against my body from the terror of almost watching me fall, I cried. I cried for Eric and his fear and pain in his final moments. I cried for his family. I cried for the knock on the door that woke them up from a peaceful slumber, notifying them that their son was dead. I cried for us, Eric’s friends, that would have to live on with such a massive hole in our beloved friend group.

After some time we all calmed down. The cliffside was quite again. My screams and sobs no longer reverberated off the sandstone rock. I was unsure if the other climbers around the corner had heard my racket. It didn’t matter. I slumped on a rock, still in my harness and climbing shoes. I peeled them off with my limp arms and let them fall and thud to the ground. Mike pulled the rope and Hannah got the backpacks ready. So utterly exhausted, I was ready to lie down and sleep right there. Hannah helped me put on my shoes like a sniveling child and supported me as I managed to stand myself up. I took one last look at Old English before we walked off. The bright sun burned my sensitive and tear ridden eyes as I looked around.

2 Comments on “Tears They Run Like Water- A Rock Climbing Story About the Day My Best Friend Died, Part 3”