The second part of our trip to Arequipa revolved around visiting Colca Canyon. In the world, this canyon is the second deepest canyon behind something bigger in Tibet. It is about 3,270 meters deep. It the southern hemisphere, it is by far the largest. The entire area surrounding the canyon and the small town that can be found along its rim are perfect hubs for exploring the canyon. Most of the activity to be done in that area is backpacking and treks. You can also do some mountain biking, zip line, horseback riding etc. We didn’t have nearly enough time or money to do any of that so we explored on our own. 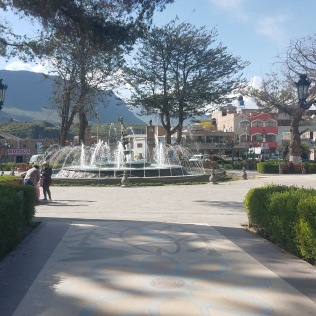 We left Arequipa on a 3:30am bus. By 7 am we were in a small town called Chivay. I consistently pronounced the name wrong but luckily it did not lead to us getting lost. It turned out that the bus the we came in was also going to a lookout point we wanted to visit. On our way there, the bus operated as public transport for the other tiny towns along the way. We would ramble our way down tiny streets and into their plazas to pick up anyone who was waiting. The bus driver made sure to use his obnoxiously loud train horn to alert anyone and everyone that he was on his way. Every time he blasted that thing I thought for sure he was trying to warn an unsuspecting driver from smashing into us. 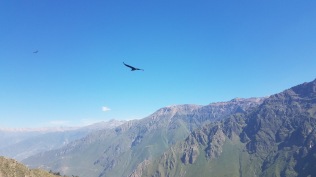 We made it to the Mirador Cruz del Cóndor just as a series of tours were ending. Within 30 minutes the number of people dropped from between 50-60 to less than 10. On top of the perfect timing, I only had to pay the 20 soles entrance fee because I am Peruvian resident. Other foreigners pay upwards of 70 soles. This might seem like a lot of money, but when you just spent your monthly pay check on beer and good food in the city, saving money becomes crucial. So with the entire rim to ourselves, we walked and sat and walked some more. We watched condors and eagles fly around in groups of 4 and 5. I took time to close my eyes, meditate and stretch. The canyon seemed to swallow us up. There was always something new to look at within the gorge, something new to appreciate. Eventually it became time to wait for the bus to come back. It came a little late but it came and we were on our way back to Chivay.

Sunburned and tired from our early wakeup call, we went looking for lunch. We found a 2 for 1 beer special, but decided that we should probably drink water and eat lunch before we indulged in any more beer. Lesia and I were both craving lomo saltado. It’s a classic Peruvian dish that comes with rice, sautéed onions, tomatoes and french-fry style potatoes. It gets served with some sort of meat, and because we were in the area, we decided to try it with alpaca meat. My carnivorous side enjoyed the meal and was glad we satisfied a craving. After eating and rehydrating like responsible adults, we quickly returned to the beer place to sit in the sun and enjoy a cold one. The weather in Chivay was perfect. We were up at just about 3,600 (about 12,000 feet) meters above sea level so the temperature was in the 60s. With sun, it was perfect and in the shade, it was just a little bit chilly. 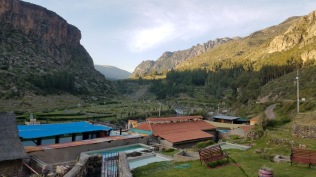 After beer, we rested for a little bit and moved onto La Calera hot springs. The place was just a short cab ride out of town up this winding and beautiful river valley. It was open until 7pm so we decided to go at 5pm in order to catch the last few hours. Once again, as we were arriving, the tours were leaving. We shared a giant pool with two other people. We watched the sun set against the surrounding canyon walls and reflected upon the past week of vacation. We moved from one pool to the next and stayed in until our skin was soft and wrinkled. We floated and swam, chit chatted and enjoyed some more beer. Turns outs, no one was in a hurry to leave so we even got to stay in past closing time. The hot springs were a perfect way to end the trip. I could feel the stress and anxiety of travel dripping off of me. My body was becoming fully relaxed and ready for a delicious and deep night’s sleep. 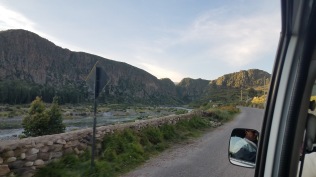 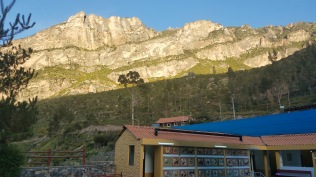