As you will notice from the title, this is part 2 of a longer blog post I wrote. Where is part 1 you ask? Well, it’s not public. I’ve decided to not put it on the interwebs in order to avoid judgment and potential problems from my audience (Peace Corps, future employers etc). In other words, my grandparents read this blog and there is no need for them to read an entirely vulgar and embarrassing blog post about poop. With that said, if you want to read it, just leave a comment on this post or let me know on WhatsApp and I’ll send it to you privately. Now on to the blog post…

My carnaval  experience came when my family invited me to the local yunsa festival. The yunsa festivities pop up all over Peru during the month of February. Individual communities all prepare their own party but the origins tend to be the same. As it would turn out, this was the only event that I was able to attend. I’m missing a lot of the parties because I need to go to Lima for early in-service training. This is definitely a point of frustration. The PC preaches a lot about cultural integration and experiencing as many local events a possible, yet they schedule training during one of the biggest cultural events for the entire country. Nonetheless, the PC schedule is busy so I like to believe that there is a legit reason why they did it (besides just behavior management of their new volunteers during a fun and exciting time).

The yunsa is a celebration of the campesinos— the people/farmers who live in rural parts of Peru. Yunsa has to do with the changing of time and is a celebration of the new harvest. Traditionally, it’s called cortamonte which roughly translates to ‘short mountain’. In general, a tree is cut down and dragged down to the location of the party. Later it gets ‘replanted’ in the ground and decorated with gifts like a Christmas tree. Blankets, purses, clothing and other decorations are hung in the tree until the weight of all the items looks like it will topple over. Once the tree is armed and ready to go, the dance party ensues until the wee hours of the night. Once everyone is good and liquored up, the tree cutting begins. Community members take turns dancing around the tree and taking hacks at the trunk. Eventually the tree falls and gets raided for its gifts. The last person to chop the tree then becomes the mayordomo and is responsible for organizing and financing next year’s yunsa festivities. 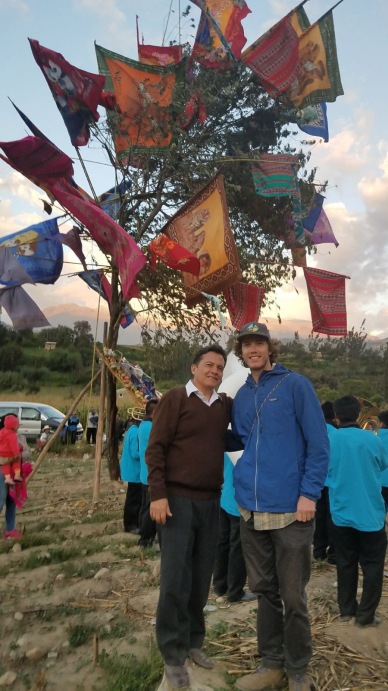 My host family took my to the yunsa party specifically so I could experience it. It was a beautiful evening when we took our walk down to the party. It was located in a nearby annex in my district. From up on high on my hill, the colors and music from the party could be seen from a far distance. As we arrived, all the normal party arrangements were already there. A señora selling her fried chicken, mobile kioskos selling toys and candy for the children, and some man selling beer out of one of the houses.

It was really nice to show up to a local event and see so many familiar faces. It almost felt like I was supposed to be there. But still a certain part of me felt out of place. I look forward to the moment where that uncomfortableness melts away. As we strolled through the party, I greeted as many people as I could. The parents and families were excited to see me, and the kids from the colegio acted like they were too cool to interact with my in public. Classic teenagers. It didn’t take long for me to get invited into a beer circle. I hung out and chatted for a few rounds until the beer ran out. These dudes hadn’t yet upgraded to the box of beer, just a few bottles.

My host-dad and I decided to move in a littler closer to the tree and dance party. In my eyes (and ears), there were two bands. I quickly learned that one was a banda and the other was an orquesta. The difference is that the band has a horn section, while the orquestra has a harp player. The two groups took turns playing songs.  It seemed to me like the band was more popular, but after a certain amount of beers, Peruvians will literally dance to anything.

On the far side of the cornfield, I saw a few of my counterparts from the school I work with. I made my way over and joined their group. It felt good to feel like I had some co-workers and people to spend time with because to be honest, my host-dad was strangely not very exciting or sociable at the party. We hung out, shared beers and had good conversations. Everyone rotated in and out of the dance, always coming back for a ‘water’ break. We ourselves didn’t have a box, but the beer still seemed endless. The Mayor of my community and another man kept coming over to bring us beers. I found out that if you hangout with the right people, and are well respected,  people love to share their drinks with you. So there we were, watching the sunset, enjoying cheap Peruvian beer and observing as the party evolved. 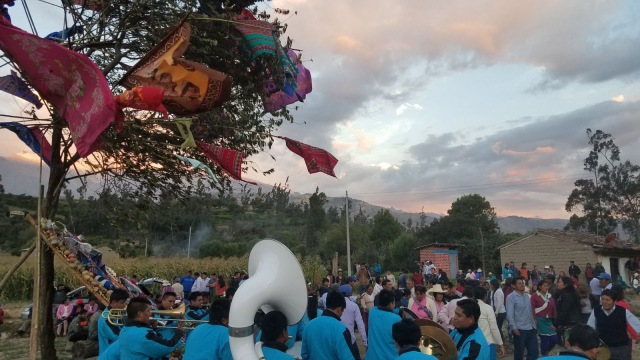 Eventually the sun went down. Everything got real dark, real quick. I guess nobody to take the time to figure out the lighting, but it really didn’t matter. The band and orquestra continued duelling and the people continued dancing.  Eventually is was time to cut the tree. Out of the darkness a man came with an axe and began chopping. A circle formed around the tree and people began scoping the items they wanted to score. I’m not sure how long it took but the tree fell a lot earlier than I thought it would . I really wanted to get in there and give it a few chops, but I’m glad I didn’t. As the tree fell, chaos happened. Lots of dust, yelling, pushing and shoving. I think even one dude was underneith the branches somewhere. People were fighting over blankets and arguing about who grabbed it first. Luckily for me, no body saw the two items I pulled out. I got a shirt that doesn’t fit and a women’s purse.

We regrouped after the tree fell to talk about the gifts we pulled out. I decided I would try and gift the purse to someone in my family and the shirt to my little host-brother. Shortly after, it was time to go home. I was glad because I was exhausted and had to go to work the next day. However, no end was in sight for the rest of the party. We strolled out of the party and went to find a car to take us home. We tried to buy some chicken but she was all out– which, if I am being honest, I was also glad for also. A neighbor picked the family up and shoved us all in. We bumped along dark roads until we were let out in front of our house.

In general, the event was really fun. I was grateful to experience a small amount of carnaval  before I had to travel to Lima for training. I am hoping that next February I will have the opportunity to attend more events. The yunsa party was a nice reminder of the integration I am experiencing. The familiar faces and friendly greetings I received reminded me that with time, one can feel like they belong. Reflecting back, the event didn’t seem as daunting as other social events in the past. Most of me was excited to see what the night was going to have in store for me. It feels like little by little, I am garnering more confidence and confianza with the members of my community. That really feels good, and is perhaps the favorite thing I learned from the entire experience.