Sunday’s are special days in Peru. For many pepole, They symbolize togetherness, religiosity and family time. It’s a day where the markets and parks become bustling with eager shoppers and children playing games or flying kites. Others can be found attending mass and celebrating their god.

For my Peruvian family, Sunday was a day to spend together, to run errands and to attend a parade that was helping celebrate los niños.

It began by accomplishing a few tasks in a small town called Chosica. Surrounded by what I would call mountains (but to Peruvians they are only cerros), Chosica offers urban convenience but in a small, old fashioned package. We pulled over multiple times in front of various stores and markets.  My host brother Anthony would then get out of the car and disappear for 10 or 15 minutes as we slowly drove up the busy road. He then would appear once again in front of us with an arm full of important items. He purchased some shoes and other items for his work as a street performer and diapers for our baby sister. This repeated itself a few times until we dropped him off for work at a day club. There are many of these in Chosica due to its natural beauty. Clubs are places where families go, they pay for entry and spend the day playing on manicured grass lawns and swimming in pools. Both highly sought after items in this area of Peru. 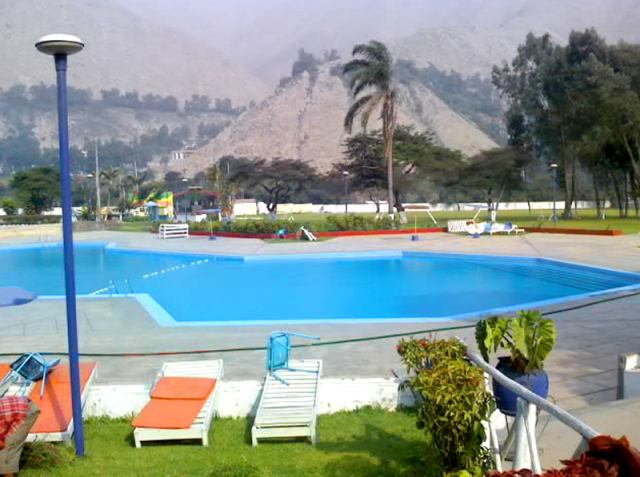 After running errands, we proceeded to a smaller town called Ate. After turning around abruptly,  and me thinking we were lost, my host father Roger pulled over to offer a ride to a women sitting on the side of the road. Her husband (I think?) appeared out of nowhere as well and joined the carpool. Turns out, she is my host mother’s, Gloria, cousin. So here we were, a large Peruvian family sitting intimately in a small car, and one gringo pressed up against the window. It was better that way for sight seeing.

After arriving at the parade, my host family and I quickly joined the procession. Gloria with the baby, and my two younger brothers,  Marcos and Reynaldo, followed the parade on foot. Roger followed slowly in the car. They taught me how to dance appropriately and were very patient with my lack of rhythm. The orchestra that was playing was very good, and knew the music and the cues from the parade leader perfectly.

I even learned how to drink beer by Peruvian custom. The parade would stop at various houses. The host would come out, say a few words and pass around what seemed to be endless boxes of beer. The bottles were big, and thus, supposed to be shared. The drinker would poor a sip or two in a small plastic cup, pass the bottle to the next person, finish the drink, and empty the foamy leftovers on the ground. Then they would pass the cup to the new bottle holder, and the cycle would continue. And wow did it continue.

The parade ended in a small side street that was made into a dead end because of the giant stage that was constructed. Which was Decorated elgegantly with the local beer sponsors. As the parade arrived, more and more people filled in behind us. Next thing I know, there’s a full blown Peruvian block party occurring. 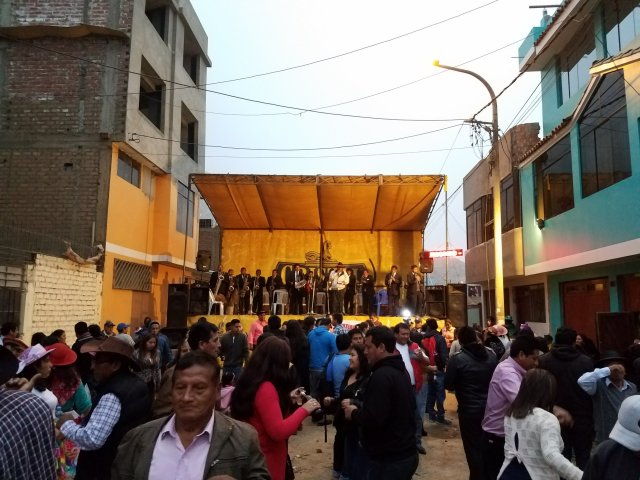 Delicious dinner is being served mysteriously from one of the houses and boxes of beer continue to be bought from a small shack erected solely for the purposes of making sure the parade, which was now just a party, was thoroughly  hydrated.

The live music continued and we danced as a group. Unopened bottles of beer on the ground in the middle, with 1 or 2 on rotation. By this point, either I was getting a better feel for the style of dance, or I was just tipsy. Either way I felt like I was doing a decent job. Hours later we were still dancing, drinking and smiling.

As the time came to leave, we shoved ourselves back into our car, this time with one of my fellow Peace Corp trainees and her host mother, and bumped down the road towards our home in Yanacoto. We stopped for gas, dropped of my friend and her mom and continued back to Chosica, this time to buy groceries for the week.

We arrived to a very busy outdoor, but covered, market. I followed my host mom inside with my two hermanos. I watched  as Gloria expertly picked out her produce and bargained with the vendors. My brothers and I, close behind, made sure to take advantage of all the delicious samples that were being offered.

Inspired by the different fruits (thats a hint), Marcos told me a riddle: “Tienes una corona, pero no eres rey. Tienes escamas, pero no eres in pez”. Can you figure out the answer?

After the market, we finally returned home to play a few hands of Uno, one of the gifts I offered my new family, and eat a late dinner. Drunk munchies are thing here in Peru also. With a belly full of food, I brushed my teeth and retired to my room. I switched into my PJs, snuggled up in my quilted twin bed and fell asleep soundly. Only to be awoken at the perfect time (around 5:45- 6am) by my family’s rooster. Feeling rested and ready for my first full week of training I rolled out of bed and readied myself for a full, exhausting and rewarding day.

← “The Toughest Job You’ll Ever Love”
Watch the Earth Turn →